The Bergmans- Generations of Green Space 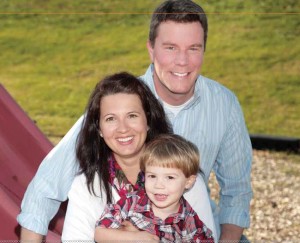 Matt and Jessica Bergman have watched New Albany transform around them. They have owned the Wilcox Block building in downtown New Albany since 2006, before the YMCA built its new facility and before the downtown began its remarkable transformation into a hub of independent restaurants, shops and galleries. The Bergmans rent the first floor as restaurant space for Louis Le Francais, a French bistro, and live on the second and third floors of the building.

Since the birth of their son, Gus, in 2010, they’ve come to appreciate another aspect of living in New Albany even more; its greenways and parks. Gus enjoys going for a walk with the Bergmans and their dog, Javier, and their destination is usually the New Albany Greenway. Except for a few months in the winter, it provides a welcome way for them and their son to get some
exercise and enjoy the outdoors.

Though the Bergmans are young – both are in their mid-30s – they believe it’s not too soon to start thinking about how they can make a lasting impact on the community they’ve grown to love. They have created a fund with the Community Foundation that will give grants to create and improve parks and green spaces in Floyd County. They can gradually add to this fund during their lifetime
and have arranged to fund it from their estates so that their charitable passion will continue, in their names, for generations.

Matt says he likes to think of his grandchildren – and subsequent generations – playing in parks created or supported with their grants. “Giving has to be well-planned and thoughtful to be effective,” Matt says. “By starting our fund now, we’re creating a way for us to be generous a little at a time. Over time, our gifts will build and earn interest, allowing us to make a much greater impact.”