Joe Glover always knew he wanted to be involved in sports. But after a knee injury while playing football, he got involved in joe announcing at sporting events and assisting the media who were covering games.

Soon, Glover was the voice of the Bulldogs as he narrated the games for WNAS, the New Albany High School radio station. “A lot of our fans are of older age, and can’t come to games,” Glover says of his love of broadcasting sports. “But New Albany basketball is something they can really relate to. It allowed them to stay close to New Albany High School Athletics.”

Glover, 20, excelled academically as well, earning a Lilly Scholarship when he graduated from New Albany High School in 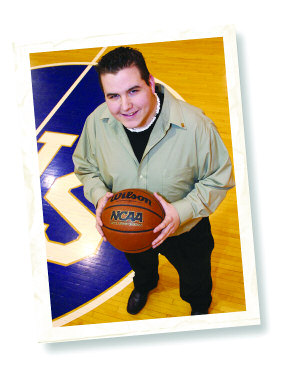 2004 with an Indiana Academic Honors Diploma. The Lilly Endowment Community Scholarship Program pays full tuition at any accredited Indiana university plus $800 towards required books and fees for the entire four years of the student’s academic career.

Glover credits the Lilly scholarship with helping him succeed at such a young age. Because of the scholarship, he could pursue his dreams without worrying about money. “It changed my plans immensely,” Glover says. “There is no way I would have been able to work in college athletics and do all of these things at the college level without the Lilly scholarship. Working with the University of Louisville Athletic Department was key to me being able to get the job at IU Southeast.”

Joe Glover was named the Director of Athletics at Indiana University Southeast on July 1, 2010.